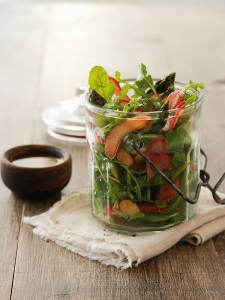 chicago’s green city market has continued to grow over the years with the support of many local chefs, who not only shop there for their restaurants, but also do cooking demonstrations throughout the season highlighting local ingredients. a few years ago i did one of these cooking demos in the spring, when asparagus and rhubarb were both flooding the market, so i decided to combine them into this very simple, refreshing salad. rhubarb can be a bit tricky, as it has such a strong bitter taste to it, so i do a sort of quick pickle to bring out the natural sweetness and tenderize it just a bit. the sweet-and-sour rhubarb, the tart and creamy goat cheese, the crunch of the almonds, and the beautiful asparagus all come together so well, you’ll wish it was spring all year.

1. combine the vinegar and sugar in a small saucepan over medium-high heat. bring to a boil, stirring occasionally, until the sugar is dissolved. pour the hot liquid over the rhubarb in a medium bowl and let it sit until the liquid has cooled and the rhubarb is slightly tender.

2. strain the liquid from the rhubarb, reserving both. make a vinaigrette by whisking 2 tablespoons of the pickling liquid with ¼ cup of the oil in a small bowl. refrigerate the remaining liquid for another use.

3. preheat the grill to medium-high or the oven to 350°f. trim off the woody ends of the asparagus, discard, and toss the spears with the remaining 2 tablespoons oil. season lightly with salt and pepper.

4. set the asparagus spears horizontally across the hot, oiled grill grates and grill until tender, 5 to 7 minutes, turning once or twice. let the asparagus cool slightly, then cut the spears into 2-inch pieces. (if grilling isn’t an option, roast them in the oven for 20 minutes.)

5. in a large bowl, combine the asparagus with the arugula, goat cheese, almonds, and reserved rhubarb slices. drizzle in the vinaigrette, toss to coat, and serve.

drink tip: rhubarb is pretty tart on its own; throw goat cheese into the mix and you have some serious tang going on. so when you think of countering this with a sweeter wine, you’re on the right track. just don’t go too far—try an austrian riesling, which tends to be a little less cloying than a german riesling.