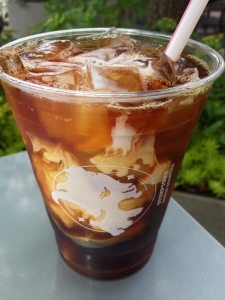 first off, did you know that at little goat, we brew our own cold brew coffee?

while technically some scientists might agree that drinking hot beverages on a hot day cools the body down, it’s not exactly a fun way to enjoy the summer weather (and neither is talking about the scientific theories on body temperature regulation.)

so in lieu of following the “hot + hot = cool” advice and want to skip straight to the “cool,” a caffeinated summer go-to is iced coffee. but did you know that a lot more goes into iced coffee than just brewing hot coffee and serving it chilled, over ice?

in fact, if you were to simply brew some hot coffee and throw it into a pitcher in your fridge, you might run into a gross fungus situation. when hot coffee is brewed and served at its best, it is around 200 degrees. when that temperature starts to fall, you enter into this “danger zone” where if it sits for too long it could get kinda gross and taste terrible!

mike from stumptown helped us out with our cold brew, and he added that, “probably the most noteworthy and well-known difference it that a high heat extraction,” for hot coffee, “tends to be higher in acid than a long, slow, cold brewed coffee. while the higher acid in a hot coffee can lend itself to tons of amazing flavors, (i.e. … citrus fruit, apple, and grape) it also makes the brew more volatile and subject to change over a pretty short period of time. things like staling and oxidization start to set in quickly. a really good hot coffee should still taste good by the time it is cool, but will start to get funky tasting pretty shortly thereafter.”

to steep, we use something called a “filtron” which is essentially a gigantic french press. 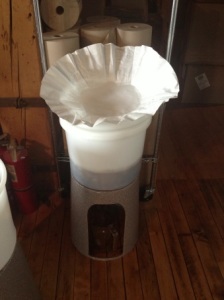 the filtron takes  5 pounds of grounds that are ground courser than regular grounds for hot coffee. why? mike from stumptown says that, “the grounds are more course because the long extraction doesn’t call for a small particle size. plus, the larger grounds are easier to separate and clean up at the end of the brew/steep.”

at the bottom of the filtron, we put this thick wool filter (that kind of looks like a tortilla) at the bottom to really keep grounds out.

the on top of that we put a gigantic regular coffee filter. gigantic (see above, sitting on top of the filtron).

then we pile the 5 pounds of grounds on top in the basin and put in something called a “grounds guard” that keeps the gigantic filter open and wide. 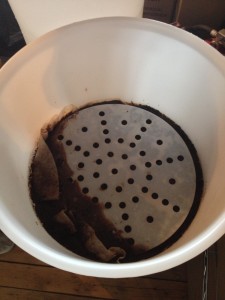 the top of the filtron has holes in it, so you turn it upside down and it acts as a shower as you pour 3 gallons of cold water on top of the guard and grounds.

we let it steep for at least 12 hours (usually more like 16). what comes out of the stop valve on the filtron is actually iced coffee concentrate. to drink, you add water at a 1-1 ratio, pour over ice and enjoy!

“since cold brew is lower in acid and made as a concentrate, it is way more shelf-stable and can keep in your fridge for up to a week without any major changes or drop off in quality. as a bonus, folks with sensitive stomachs find the lower acid cold brew much more drinkable too.” thanks, mike 🙂

while we use the 5 gallon filtron, filtron sells smaller ones for those who want to brew at home!

stephanie has officially made the switch to cold brew coffee for the summer, and now that it’s at little goat, she can get her fix daily! come on by, especially for double-stamp tuesday, if you’re not in the club already – get in, it’s free to do and an awesome deal. 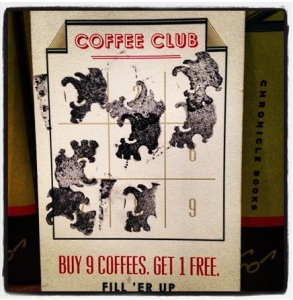